On March 31, 2021, School of life sciences, Wuhan University Sun mengxiang The professor team is in Nature A report entitled “” Fertilized egg cells secrete endopeptidases to avoid polytubey Research papers of, The new mechanism of plant preventing polyspermy from entering eggs is revealed, It reveals a mystery of plant fertilization that people have not known for a long time.

Core antibody in this paper Specific antibodies to lure1 (rabbit and mouse monoclonal antibodies) It was prepared by Wuhan dai'an.

▎ Background and significance of the study

Fertilization is a key event in the life cycle of animals and plants, that is, a sperm from the father and an egg cell from the mother fuse to form a fertilized egg, and the fertilized egg is the beginning of new life. However, during normal fertilization, the number of sperm is much larger than the number of egg cells. However, little is known about how plants ensure the successful fusion of an egg cell with only one sperm.

Different from animals, the oocytes of plants are deeply embedded in the maternal tissues, so it is difficult to obtain and carry out relevant research work. After a long period of exploration, sun mengxiang's research group created a unique set of egg cell separation technology, combined with single cell sequencing technology, constructed the world's first Arabidopsis oocyte and fertilized egg transcriptome database, and identified two aspartate protease ecs1 and ecs2 that only expressed in egg cells.

It has been found that before fertilization, ecs1 and ecs2 are mainly distributed in the egg cells. When the sperm cells fuse with the egg cells, ecs1 and ecs2 are rapidly secreted around the egg cells, which degrade the pollen tube attraction signal lure secreted by its accessory cells (cocells), so as to prevent the pollen tubes conveying more sperm from entering the embryo sac and prevent the fertilized eggs from fusing with sperm again.

This study reveals in detail a new mechanism for plants to prevent polyspermy from entering the egg. At the same time, it also reveals that the oocytes can sense the success of fertilization. Only when the fertilization is successful, the oocytes will release ECs to prevent the entry of extra pollen tubes. This achievement fills a gap in this field and explains why the pollen tube can still enter the embryo sac even if fertilization is unsuccessful, but it can quickly prevent the extra sperm cells from entering the embryo sac after successful fertilization.

Here are some of the results of studies using this antibody: 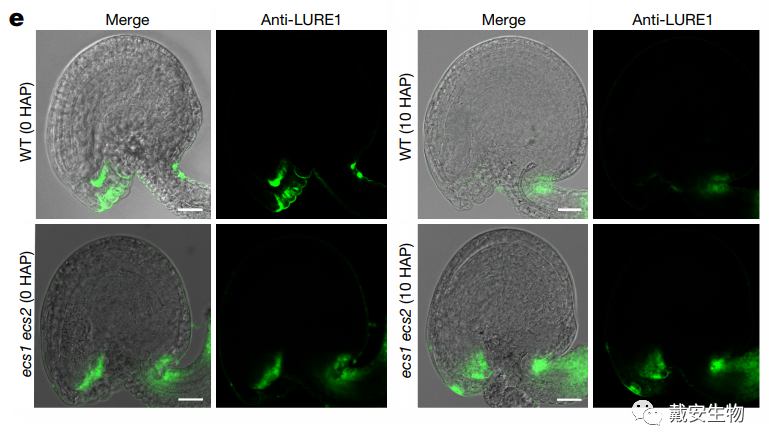